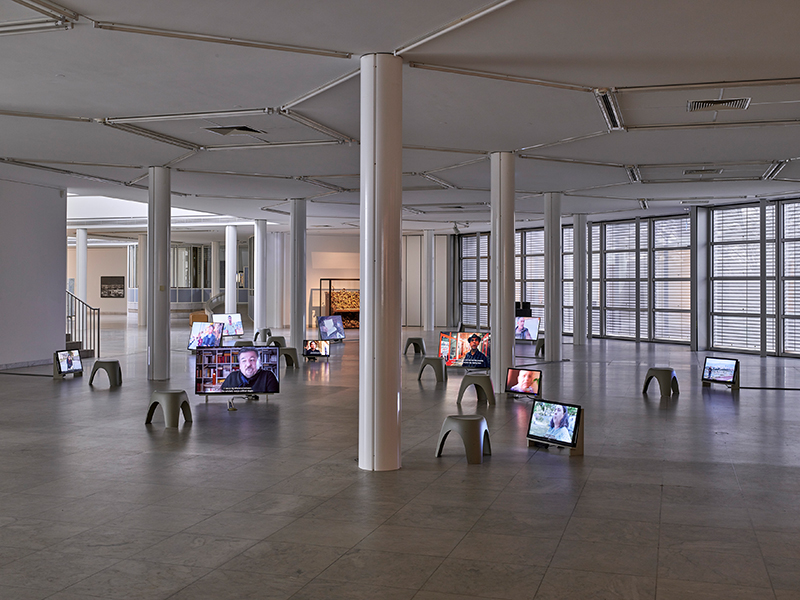 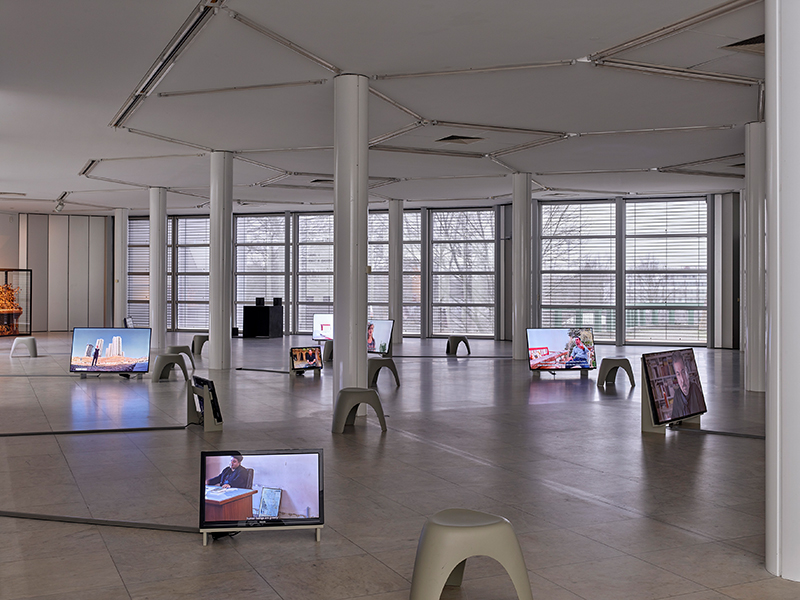 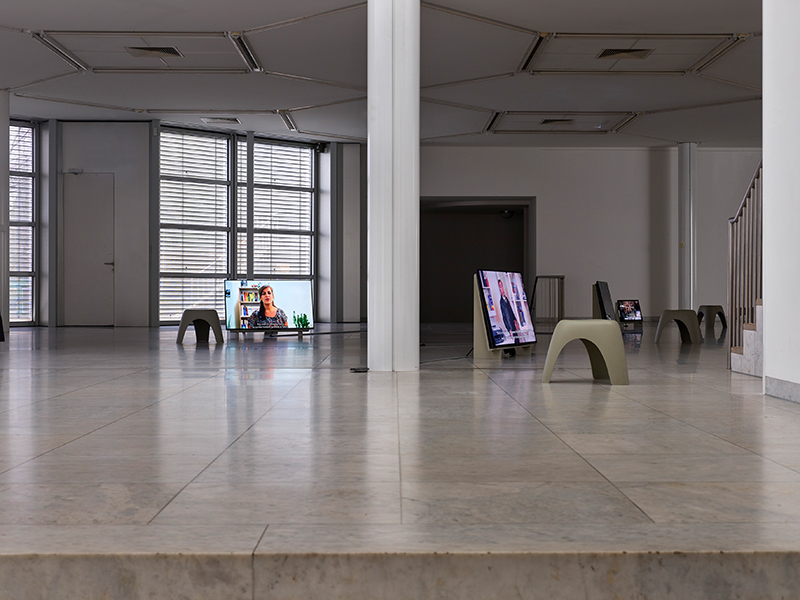 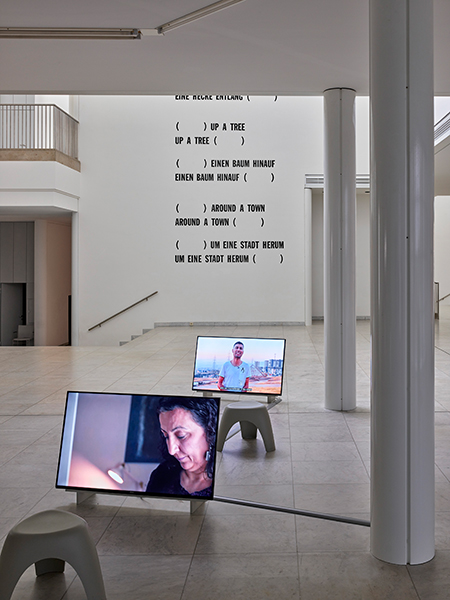 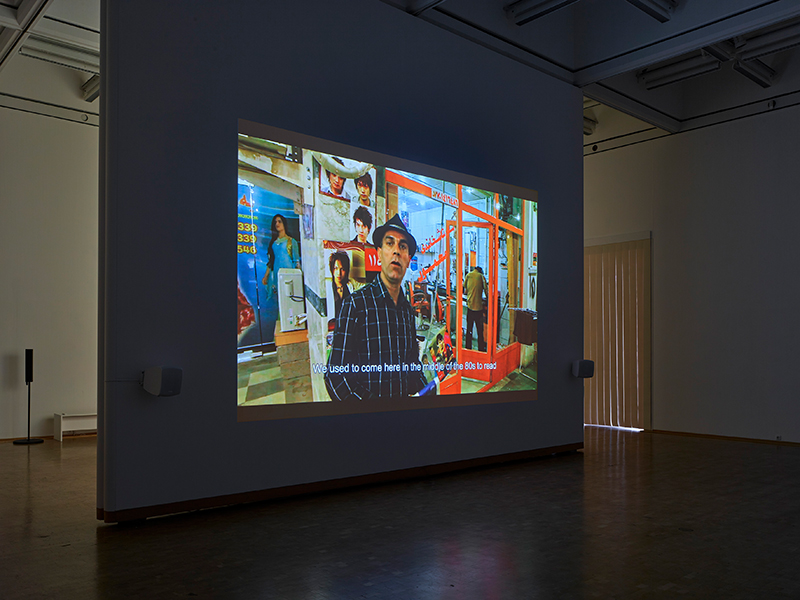 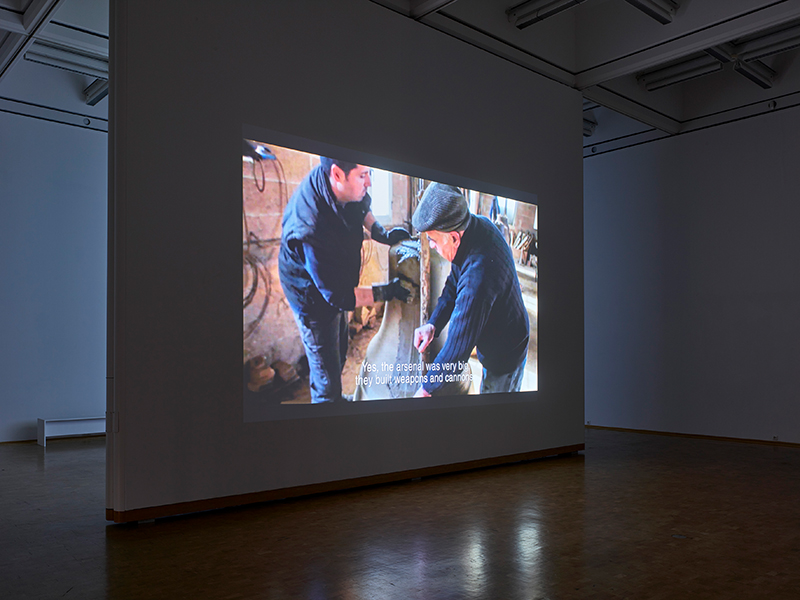 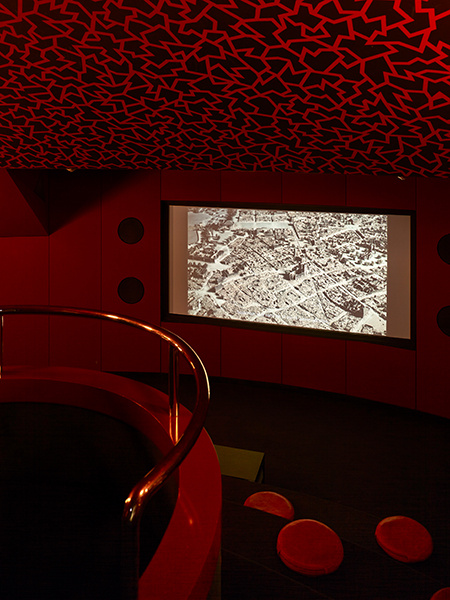 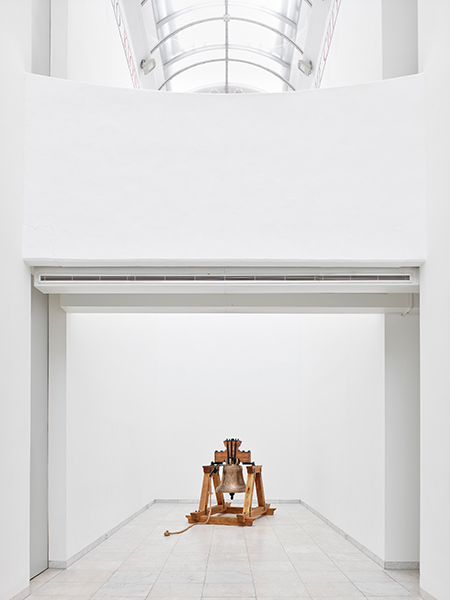 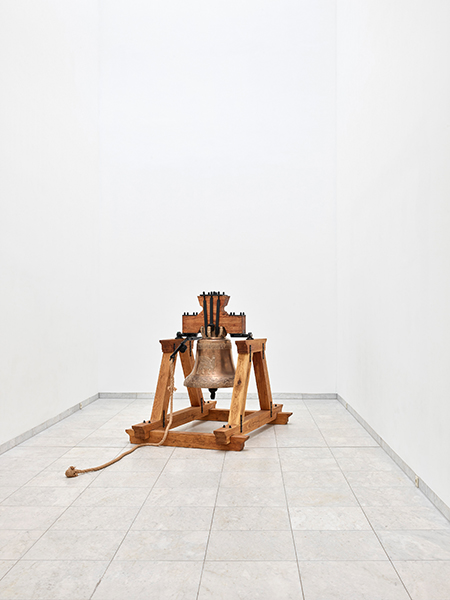 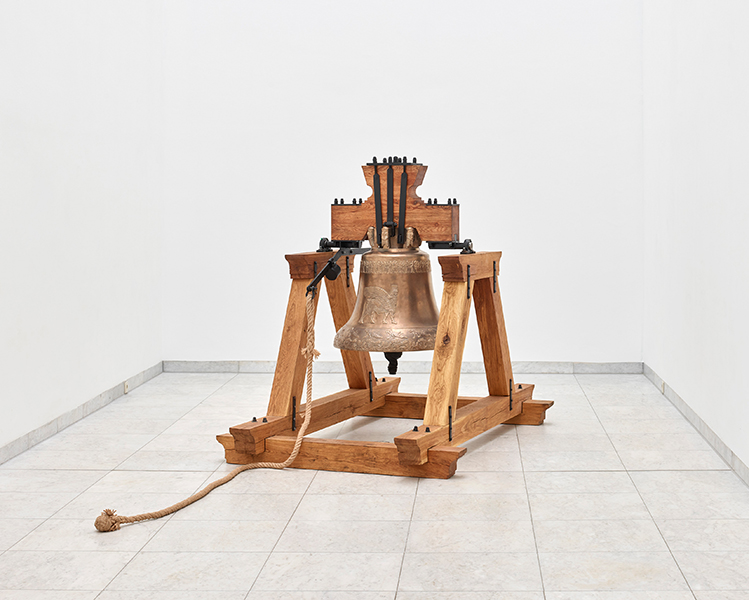 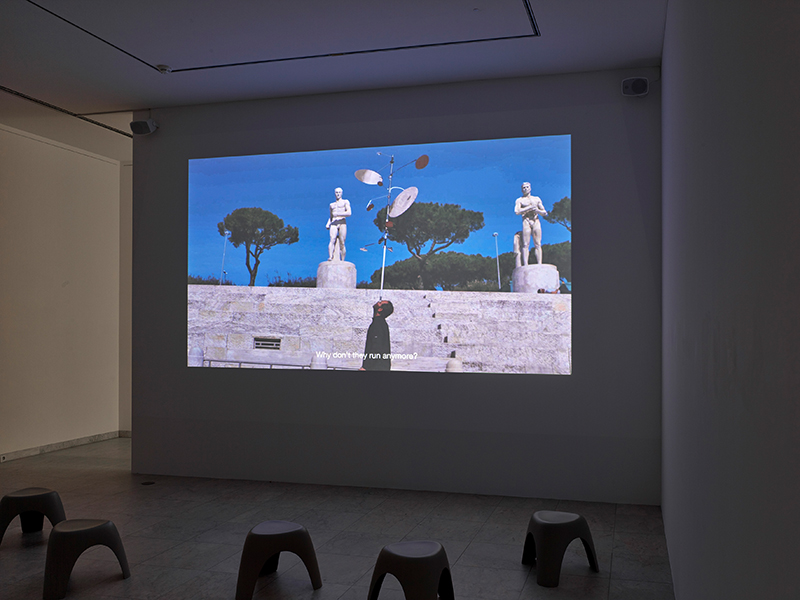 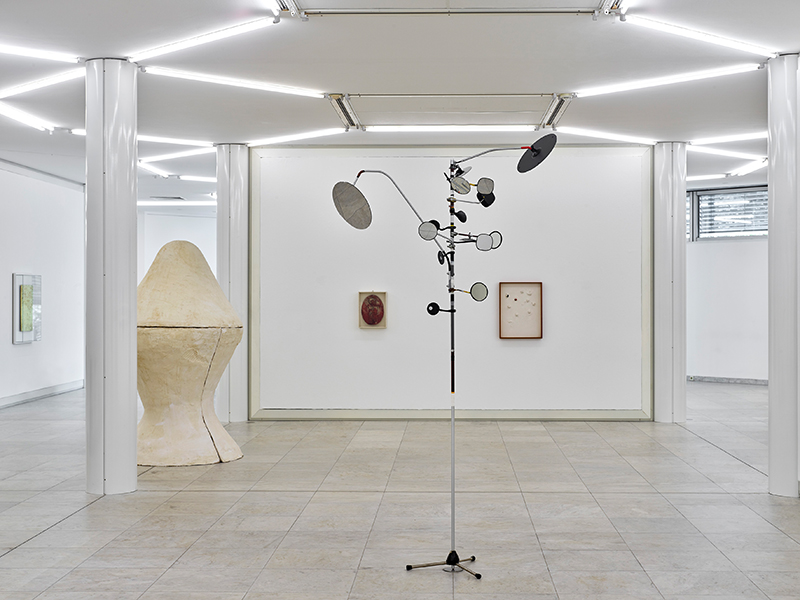 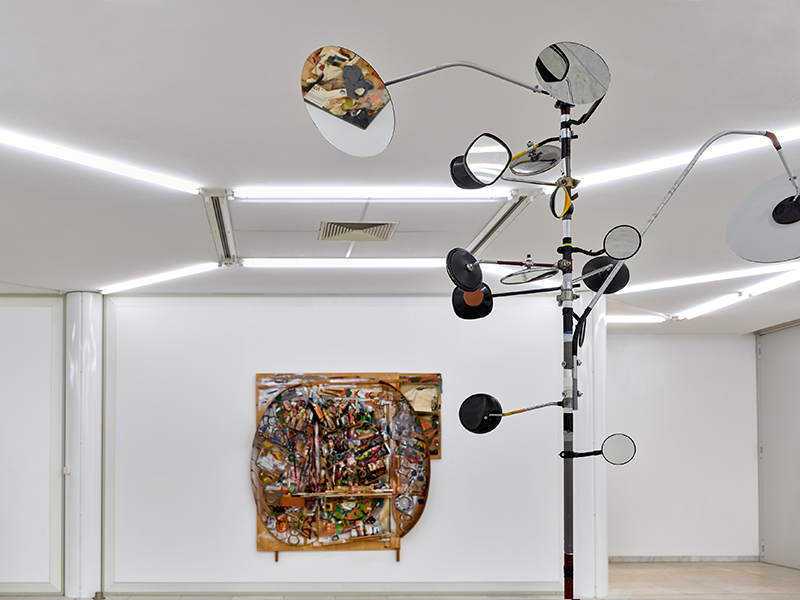 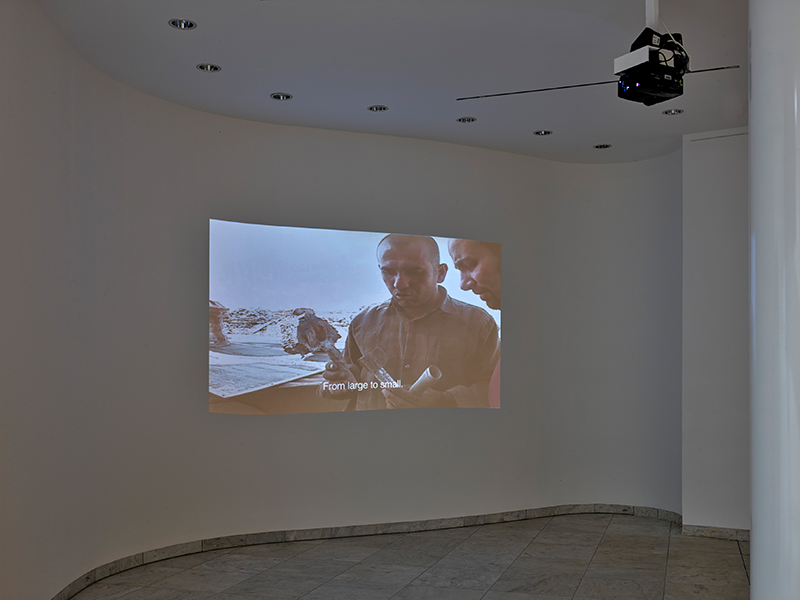 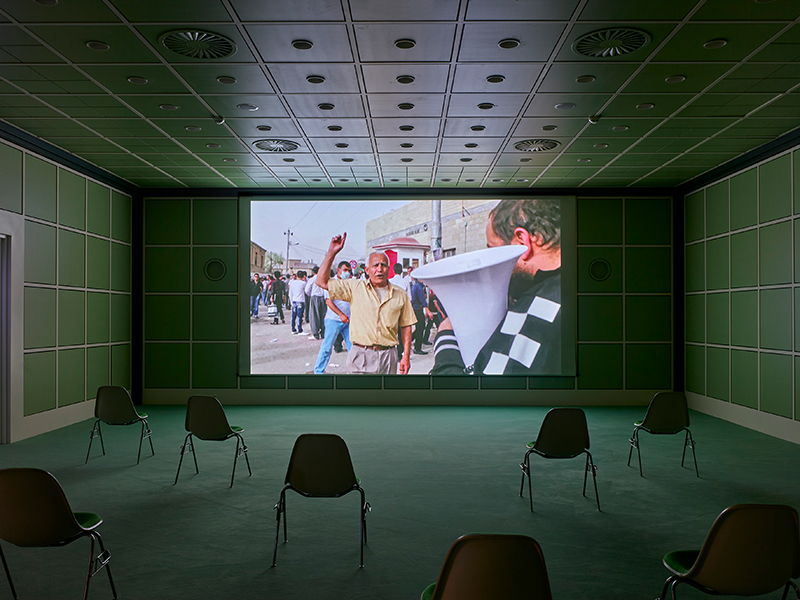 Hiwa K (born 1975 in Sulaymaniyah, Iraq) has been reflecting on his personal position as a Kurdish-Iraqi exile and intellectual since his earliest artistic beginnings. Many of his works problematize a foreignness to his audience in exile, the frequent incommunicability of existential questions, and the fundamental distance between people who grew up and live in Germany and those in Iraq or the Middle East, for example. Hiwa K studied literature and philosophy in Sulaymaniyah. He established close ties to the Rhineland as a musician and lived for some time in Düsseldorf. The artist went on to study visual arts and attracted notice with a series of student projects addressing his status as a foreigner and “estranged” intellectual far removed from Western culture and history. For more than a year, he kept a wall in the academy designated for his works empty and white, only painting over and cleaning it again and again (Arbeitsplatz [Workspace], 2005). His wall became the academy’s “open space,” in a sense—as both a reference to the artist’s origins outside of the Western art world and a commentary on its overproduction.

Hiwa K’s practice is characterized by works completed over long periods of time and relatively few objects created in very specific, emblematic processes. Many of his artworks contemplate the current present and its history. “All Cities Have Destruction in Common,” the title of his exhibition at the Museum Abteiberg,broadly refers to connections he wants to draw in Mönchengladbach with a number of earlier pieces and a completely new filmic work. It also references a piece he produced for documenta 14 in Kassel and which will now also be on view in Mönchengladbach as well: View from Above (2017) shows a model of rubble in Kassel in 1945, captured in a slow, overhead tracking shot taken in the city’s Stadtmuseum. The image is accompanied by an audio piece about the various tests given to asylum seekers from unsafe zones—a voice over that blurs apparent fact with an absurd-seeming fiction.

The centerpiece for Hiwa K’s exhibition in Museum Abteiberg will be Raw Materiality. The work encompasses material from the artist’s longstanding, perhaps even crucial enquiry into philosophical and social theory every time he travels back to Iraq—one that has grown into the vast, cinematic complex of a long-term study. It consists of interviews with people involved in the Kurdish intellectual scene in Iraq. Hiwa K’s interviewees speak about their past and their dialogue in the 1970s and 80s: intellectual engagement at a time that—in a key-like connection to the philosophy of existentialism—gave rise to both a neoliberal belief in individual on the one hand and pessimism about societal developments on the other. The concept of “Thrownness” (German: Geworfenheit), adopted by Jean-Paul Sartre, Albert Camus, and Simone de Beauvoir, served in these discourses as an enormously effective, vivid image for dealing with the individual and social situation in the Middle East, especially in the university city of Sulaymaniyah, where the influential existentialist philosopher Muhammad Kamal—now a professor in Melbourne—taught in the 1970s. Hiwa K’s interviewees report from the perspective of their current exile or their still-precarious situation in Northern Iraq, delve into topics ranging from the present to the history of the past fifty years or the 20th century in the Middle East. They recall the Cold War, the 1980-88 Iran-Iraq War and the two Gulf Wars, and demonstrate past and present dimensions of their thinking with their current situation, aged appearance, and present surroundings.

Hiwa K shows more than 18 hours of film material from Iraq, bringing it into a presentation form that will challenge both viewers at Museum Abteiberg and those at several other venues where it will be shown from 2021 onwards. His concept states that the museum will not only exhibit all the material, but also select a person to edit, analyze, process, shorten, and evaluate it. The result is a cinematic experiment that resonates strongly with phenomena that are endemic to media today, including cuts, snippets, and extracts of information, multitudes of histories and thoughts, their audibility, accessibility, publicness, or isolation. The concept of film editing is a stand-in for everything underlying all the intellectuals’ statements: Iraq and the Middle East as a place and material for other forces, as “raw material” for foreign interests. As a formal and metaphorical adoption of this historical constant, Hiwa K leaves his raw film material to other people to edit, select, and interpret.

The exhibition and film project with its subsequent purchase was funded by the Ministry of Culture and Science of North Rhine-Westphalia and the Hans Fries Foundation.

DE
, Owner: (Registered business address: Germany), processes personal data only to the extent strictly necessary for the operation of this website. All details in the privacy policy.