ANTJE MAJEWSKI
APPLE. AN INTRODUCTION (OVER AND OVER AND ONCE AGAIN)
12 July – 25 October 2015 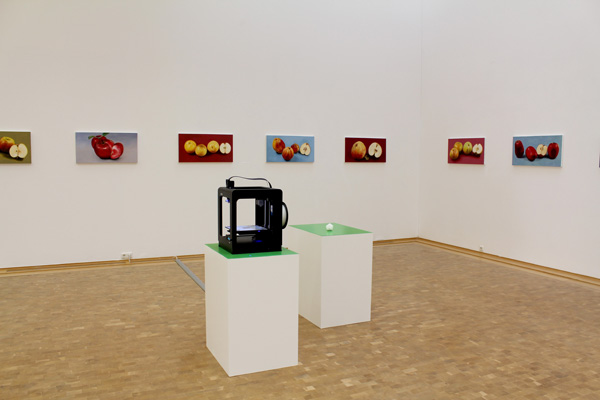 Initiated by Antje Majewski and Paweł Freisler, this exhibition is both an artistic and a scientific-cultural historical project. Berlin-based artist Antje Majewski and Polish conceptual artist Paweł Freisler (who has lived in Malmö since 1976) collaborate with other artists and a number of professionals and ama-teurs interested in the apple as a topic. The exhibition looks at the apple from an artistic and biological, ecological and economic, historical and contemporary perspective: as an unexpectedly fascinating subject with connections to both ancient human history and the latest findings in natural- and cultural science. With a planting campaign that includes various, participating urban groups, the Museum Abteiberg exhibition will expand into the surrounding urban space.

Objects in the exhibition are arranged in a way that oscillates between scientific and aesthetic presen-tation: Paweł Freisler’s wonderfully carved and embellished apples are presented dried in glass cases, but also appear in photographs by Piotr Życieński and as copies from a 3D printer. They show the apple as an object of meditation that encourages reflection on nature and time: natural and artificial clones, the apples themselves and their high-tech replicas draw attention to the parallels between nature and technology. Antje Majewski’s paintings of old and new, but also genetically modified apple varieties stand in the tradition of nature morte, bringing classic still life painting to the present by way of documentary and food photography. A video by Agnieszka Polska also deals with the historical classifications of plants. Her fictional film is a journey into the mysterious, little-known garden of Paweł Freisler, which contains not only countless plant species, but also Freisler’s legendary Standard Egg (concept 1966–69). The “perfect egg” also triggered a dialogue between Paweł Freisler and Antje Majewski, in the form of an email conversation that has continued over the past five years and has no foreseeable end: the point is reach ab ovo usque ad mala (Latin: “from the egg to the apples” / “from the beginning to the end”).

Jimmie Durham’s specially-designed bottles of apple juice were produced for dOCUMENTA (13), in a project that also involved the planting of two apple trees. The bottle labels show the Garden of Eden, with Eve enjoying a “déjeuner sur l’herbe” (luncheon on the grass)—not with Adam, but with a wolf and a bear. It was bears that ate the sweetest apples in the mountains of Kazakhstan, and by doing so, helped develop an early form of the culture apple. While every tree in the wild apple forests is an individual, today’s global agriculture production is restricted to some ten asexually propagated (cloned) varieties. With her film “The Freedom of Apples” (2012–15), Majewski conducts a fascinating case
study on biodiversity, evoking the complex relationships between the global food industry and technological progress.

Antje Majewski and Paweł Freisler see the exhibition as a way to contribute—in a very real way—to the genetic diversity of the apple, thereby preserving its individuality.
For the first time, a Museum Abteiberg exhibition will expand to include an artistic-ecological project for the city as part of the outdoor project AN INNOCENT DREAM OF A PARK (initiated in 2012): In late October, 100 trees of old, Lower Rhine region apple varieties will be planted in Mönchengladbach. The trees should be planted in public places around the city, and their apples will be free for all Mönchengladbach residents to take. The project is currently seeking tree adopters. Registration is now open: anyone interested in adopting a tree can do so by calling the museum at 02161-252631. While the trees are being handed over to their adopters, the Polish permaculture initiative Fundacja Transformacja will be conducting workshops with practical knowledge about the planting and care of the trees. All trees and workshops are free of charge.

Museum neighbors including the city’s community college (Volkshochschule), Stiftisches Human-istisches Gymnasium and the JUKOMM im STEP Youth Center on Hans-Jonas-Park are also partici-pating, joined by activists from the local Mönchengladbach garden initiatives “Berg-GartenOase” / Transition Town and the Waldhaus 12 e.V. “Margarethengarten.” A public apple festival will be held on Saturday, September 19 in Hans-Jonas-Park, reviving the tradition of a town Apfelfest. That same day, Eckart Brandt will be introducing apples from his “Boomgarden-Projekt.”

Interview on apples, Antje Majewski in conversation with Markus Kobelt: