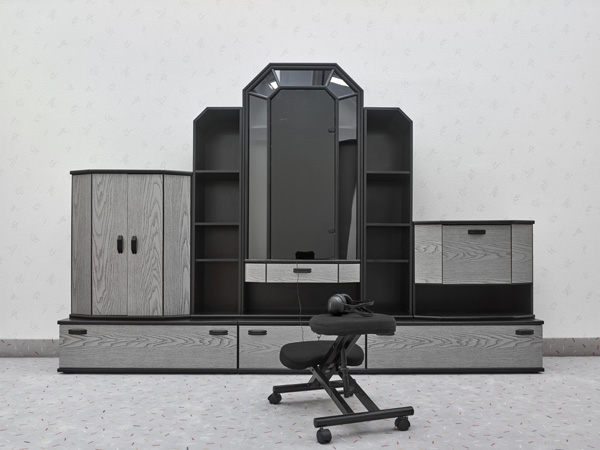 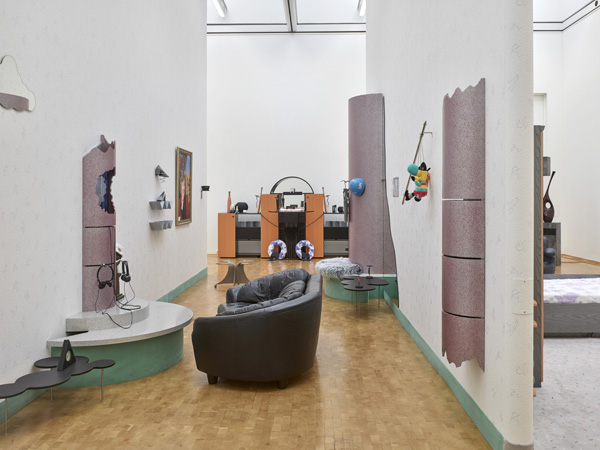 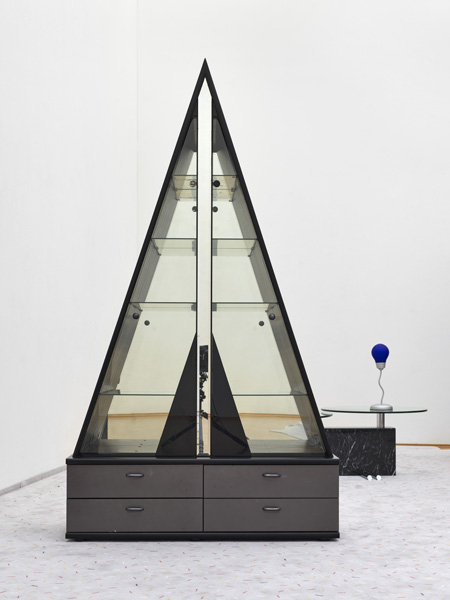 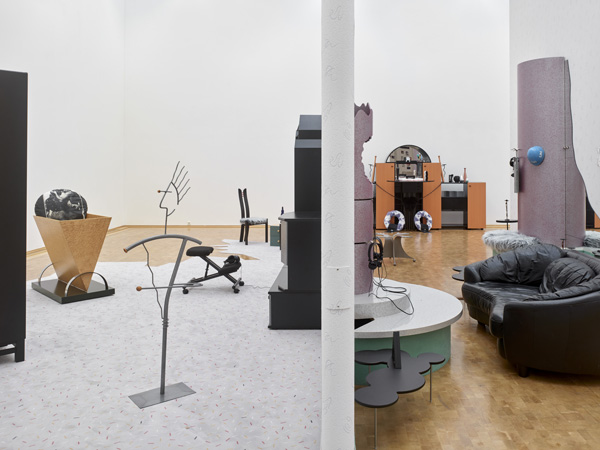 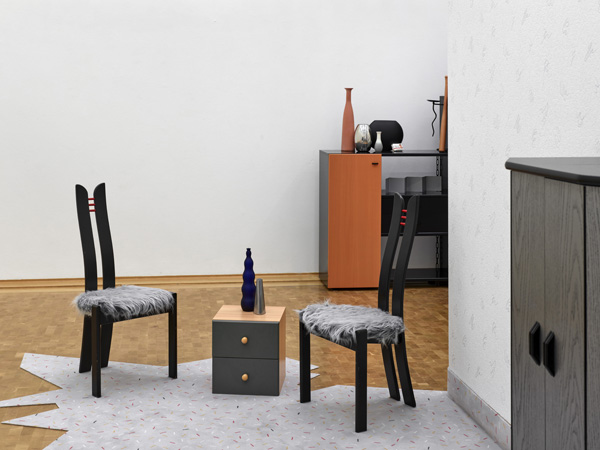 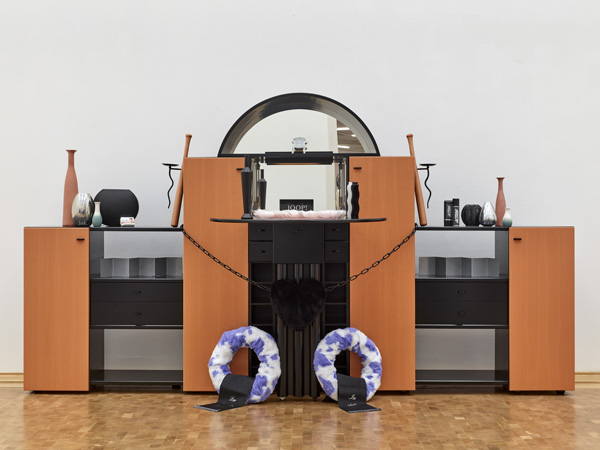 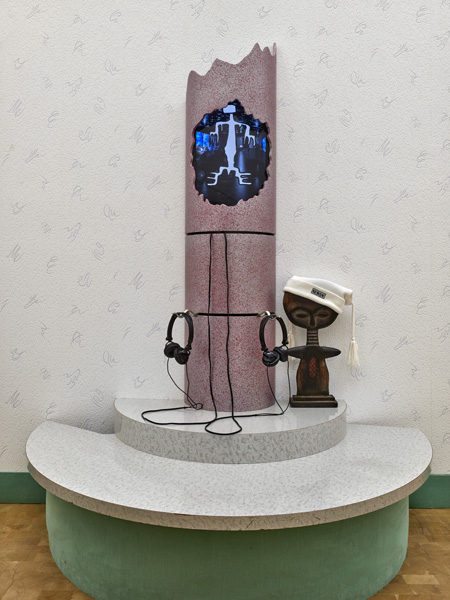 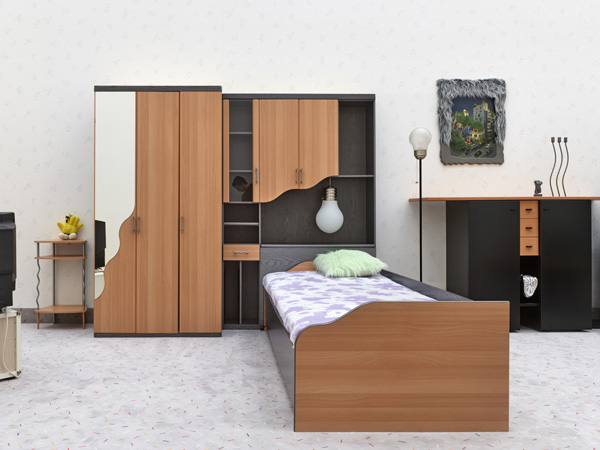 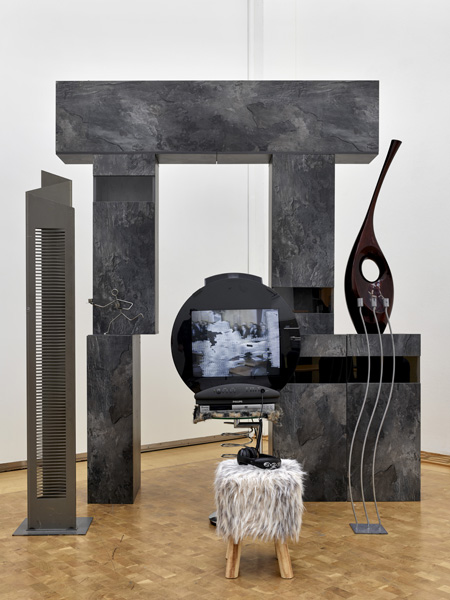 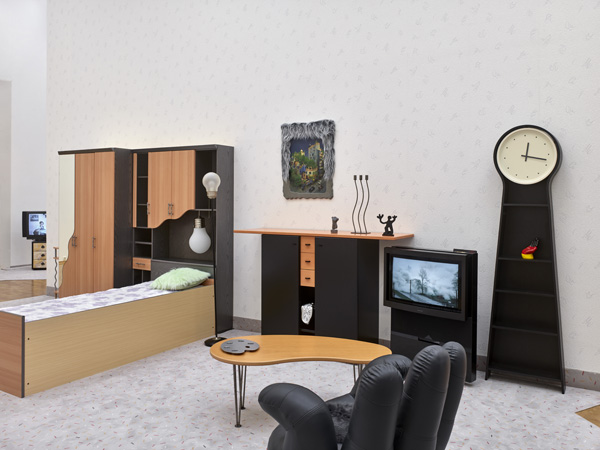 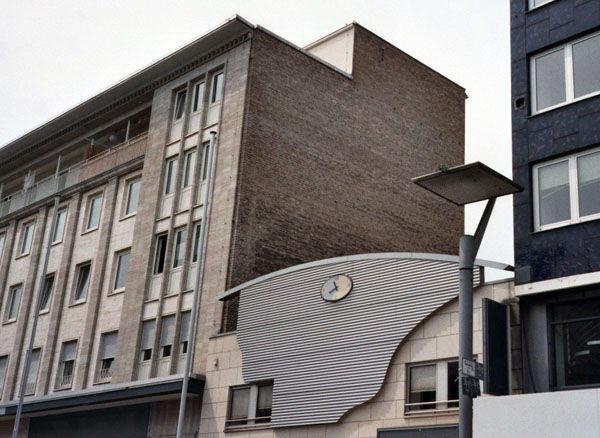 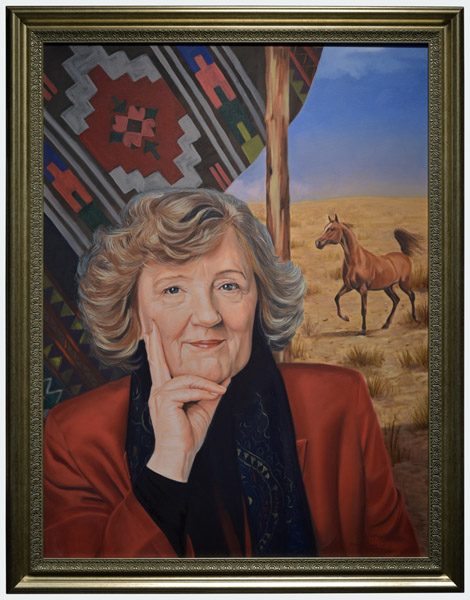 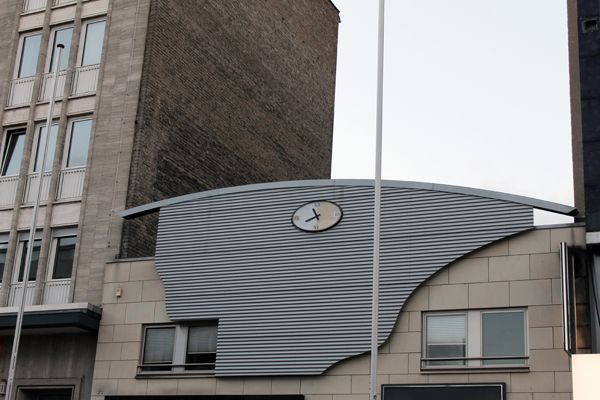 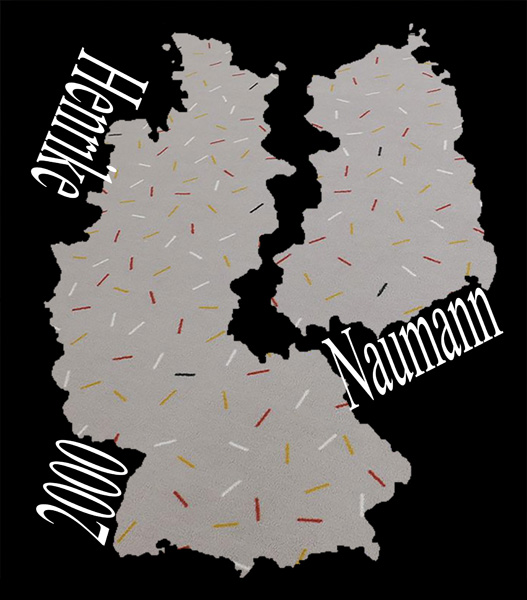 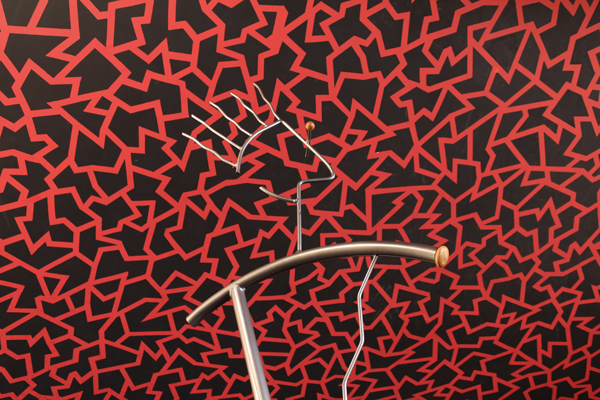 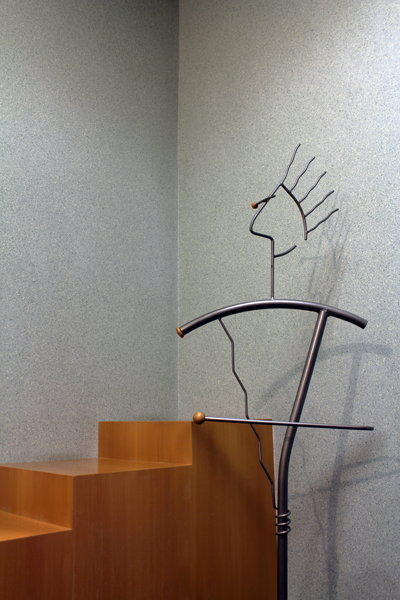 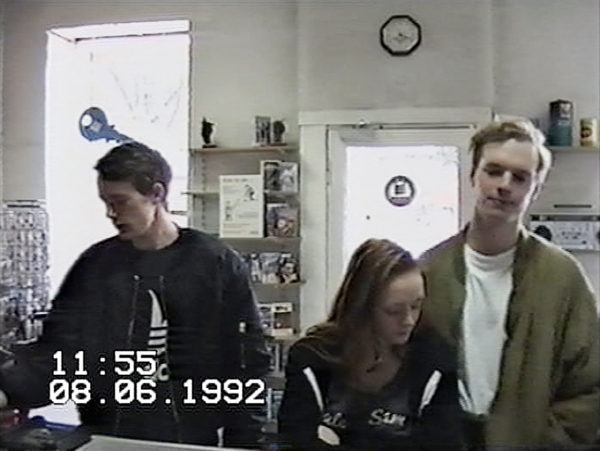 Why is it easier to find a wavy mirror today than a straight one? Henrike Naumann brings together a contemporary historical archeology of the legacies of postmodernism in Germany. What makes the ubiquity of copied postmodern designs what it is, and why is it so common in German everyday life? What social effects did the post-1990 postmodern construction boom have on the lives of people in what was once socialist East Germany? Is it possible to radicalize yourself through furniture? And what was that about the Expo 2000 in Hanover, the one whose senior organizer—former President of the Treuhand Agency—had been tasked with reprivatizing East German enterprises just a few years before?

Naumann takes the millenium changeover year as a starting point for a look at the 1990s in East and West Germany and the after-effects of postmodern design on German society. Based on her reflections, the Abteiberg Museum’s large, temporary exhibition space is transformed into a curious “German Pavilion”—an excavation site in which the ruins of postmodernism and German unification are exposed. The exhibition occupies the space between museum, trade fair stand, concept store, living room and ruin.
Expo 2000 and Terror 2000, Treuhand and Love Parade, former Chancellor Gerhard Schröder and techno DJ Dr. Motte, Generation Golf and German furniture retailer Möbel Höffner—it’s a German-German pavilion filled with objects and pieces of furniture selected subjectively and emotionally: from the artist’s archive, Exposeeum in Hanover and the living rooms of Mönchengladbach. Her video works, produced using both analogue and digital video formats, lie in the room like rubble from a near past, the antique clay fragments of our time.

Henrike Naumann (b. 1984 in Zwickau) studied stage design at the Dresden Academy of Fine Arts before pursuing coursework in production design at the University for Film and Television at Potsdam-Babelsberg. Her education lay the groundwork for a transition to visual art by developing her ability to facilitate audience immersion in spaces. Every element in an interior, every piece of furniture and accessory used in a space serves to captivate the onlooker and draw them in. Naumann operates with an almost perfidious use of the audience’s experiences, assessments and prejudices. She draws attention to the fact that we are encountering something familiar and are aware of ourselves judging it: positively or negatively, but rarely in any neutral way.
Her first works, which drew from the contents of her studies and directly appeared in exhibition spaces, explicitly explored aesthetics and society since the German unification (Handlungsbereitschaft 2, Kunstsaele Berlin 2012, Generation Loss, Friends of Contemporary Art Zwickau 2013, Mapping Time, European Media Art Festival Osnabrück 2013, Aufbau Ost, Galerie Wedding, Berlin 2016, Aufbau West, Gold + Beton, Cologne 2017, Herbstsalon, Kronprinzenpalais Berlin 2017), the confrontation between East and West and the phenomenon of right-wing extremism and extreme hedonism in her own generation. Naumann experienced it as a teenager in Zwickau and encountered it there again at the end of her studies; in 2011 the far-right German terrorist group National Socialist Underground or NSU was exposed in Zwickau, where it had maintained a low-profile bourgeois existence since 1992. In 2015 Naumann began working on subjects related to music culture, also as part of Encore, an artist’s collective. Projects included those at the Ghetto Biennale, Port-au-Prince, Haiti 2015 and 2017, in Kinshasa, Democratic Republic of the Congo, and in the Netherlands (Gabber Nation 2017).

The project “2000” for Museum Abteiberg explores the age of postmodernism in Germany, a connection between political, social and aesthetic changes, the relics of this time and their promises: Expo 2000 and the millennium changeover as high- and end points, after which postmodernism was considered the past. The venue for this exhibition speaks volumes: Museum Abteiberg, opened in 1982, was one of the founding buildings of postmodernism. Henrike Naumann’s “2000” project stands in intense dialogue with Hans Hollein’s architecture and also with his earlier exhibition Alles ist Architektur. Eine Ausstellung zum. Thema Tod [“Everything is Architecture: An Exhibition on the Subject of Death”] (Städtisches Museum Mönchengladbach, 1970), which Hollein also conceived as a post-historic excavation site.

The exhibition is accompanied by a catalogue.
For more on Henrike Naumann, visit www.henrikenaumann.com

Realized with generous funds from the Hans Fries Foundation and with support from the Exposeeum Hanover.