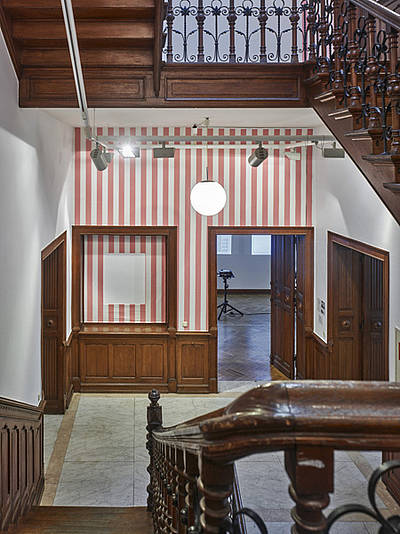 An exhibition project in Museum Abteiberg and the historical Städtisches Museum

On September 13, 1967, Johannes Cladders opened his tenure as the new director of the Städtisches Museum in Mönchengladbach with Joseph Beuys’ first museum exhibition. From then on, the institution was distinguished by a legendary program that fused an expanded notion of art with visions of a new kind of museum. The Beuys exhibition was soon followed by early exhibitions of Carl Andre (1968), Bernd and Hilla Becher (1968), George Brecht / Robert Filliou (1969), Hanne Darboven (1969), Stanley Brouwn (1970), Marcel Broodthaers (1971), Hans Hollein (1970), Richard Long (1970), Daniel Buren (1971,1975), Palermo (1973), Ulrich Rückriem (1973), Lawrence Weiner (1973), Gerhard Richter (1974), Braco Dimitrijević (1975) and many others. The program in the old building concluded with a 1978 exhibition of work by Jannis Kounellis and pointed the way for Museum Abteiberg, which opened in 1982.

Now, exactly fifty years later, the exhibition VON DA AN (FROM THEN ON): SPACES, WORKS, VISUALIZATIONS FROM THE ANTI-MUSEUM 1967–1978 looks at precisely this history. With documents and objects, reconstructions and re-performances, works from the museum collection and, not least, the historical spaces itself, the show attempts to visualize the groundbreaking ideas behind the program at that time. The title VON DA AN (FROM THEN ON) draws on Daniel Buren’s famous title “À partir de là” for his 1975 exhibition, which he conceived as a retrospective of the Mönchengladbach museum’s exhibition history. Once again, VON DA AN (FROM THEN ON) serves as a commentary reflecting on forms of museum presentation and the institution of the museum itself, also against the backdrop of a politicized time.

Rethinking the museum in a time of radical institutional critique: Cladders’ “anti-museum” concept—first published as an impressive compilation on its growing collection in the 1968 BELEG [DOCUMENT] catalogue—aims at “tearing down the four walls” and discarding museum conventions that ultimately still derive from 19th century historicism. “The ‘museal’ has long depreciated to the ‘dusty’; and yet art always remains a living present.” (Cladders) His words bear a striking parallel to a protest slogan for the late-1960s student revolt: “Unter den Talaren—Muff von 1000 Jahren” (Under the gowns / Is the musty odor of a thousand years)—a protest movement that did not reverberate in Mönchengladbach but regularly propelled the nearby Düsseldorfer Kunstakademie into crisis starting 1968. Although creative unrest and rebellion manifested mainly in the fields of art and football on the Lower Rhine, a look at the context of that time—the late 1960s and early 1970s—is vital to understanding Cladders’ “anti-museum.” His concept was developed in an era of radical political and social upheaval, accompanied by intensive discussions about the reformatting of democratic society.

Reactivation of the spaces—both in the old museum and in the Museum Abteiberg, the exhibition’s second venue—is key to the visualization. Original works, audio-, film- and photo documentation, and a number of previously unpublished archival materials complement another main focus of the exhibition: Johannes Cladders’ legendary 35 “box catalogues.” Based on boxes made by the Fluxus artists, the innovative exhibition catalogues of Paul Wember and boxed works by Marcel Duchamp, they were created as a new medium for exhibition visitors that undermined linear reading and encouraged the audience to make their own decisions as to how texts and images should be received.

While the presentation in the old museum on Bismarckstrasse—now a myth in its own right—activates the historical site with just a few selected exhibits (box catalogues, archives, works), the entire Museum Abteiberg acts in concert with this exhibition as well. The collection and exhibition merge almost imperceptibly in the museum, a built manifesto of the past history. Many outstanding acquisitions from the exhibitions of those years have made the museum’s unique collection what it is today; the labyrinthine spaces of its architecture are the anti-museum in permanent form.

This exhibition was conceived by Susanne Titz, art historian Susanne Rennert and artist Olivier Foulon. DaDaniel Buren, Braco Dimitrijević and Richard Long have restaged performances that can be experienced in both the old and the new museum. Younger artists developed two completely new contributions reactivated the tradition of Museumsfeste. In addition, guided tours, lectures and discussions were staged.

The exhibition was accompanied by a leaflet and followed by a longtime research project: the publication of an extensive documentation on the exhibition history of Mönchengladbacher 1967–78. The publication, edited by Susanne Rennert, was enabled though generous support by the Landschaftsverband Rheinland.

For the artowrks by Joseph Beuys, Carl Andre, Richard Long, Daniel Buren and Jannis Kounellis shown in this film, the image and reproduction rights are with
VG Bild-Kunst, Bonn 2017