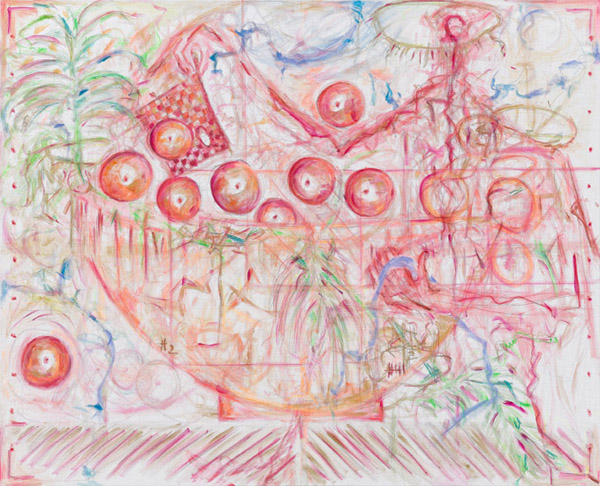 Jutta Koether implemented an exhibition for Museum Abteiberg that penetrates the history of painting. The starting point for her concept is Tour de Madame, a complex of paintings she presented as her most recent work in major retrospectives in Munich and Luxembourg last year. Originally conceived as an answer to Cy Twombly’s Lepanto cycle at Museum Brandhorst, Koether will reinstall this series—once again mounting it on glass walls—and develop it into a moment of thought and deflection point for the Museum Abteiberg collection. Other completely new works by Koether will occupy spaces for the collection on the museum’s so-called slab level, the skylight rooms between Gerhard Richter’s Eight Grey paintings and Sigmar Polke’s Kunststoffsiegelbildern (Plastic Sealant Paintings) from his cycle for the 1986 Venice Biennale.

This exhibition—the Cologne-born artist’s first museum exhibition in the Rhineland—is also a very site-specific project in which the artist draws on well-known Mönchengladbach exhibitions that dealt with both the medium of painting and its viewers and the location of the museum. An artist who began working in the largely male-dominated Cologne art scene of the early 1980s, Jutta Koether (b. 1958) established a kind of painting that has placed viewership in the image ever since. Koether’s conceptual device is the color red, as symbol and signal color. It still dominates most of her works today; it is a color filter, a kind of red pair of glasses that makes the tinged gaze, the presence of the viewer, eminently perceptible while simultaneously producing a kind of ongoing visual alarm. Koether’s current work shows more distinctly than ever the artist’s pronounced art-historical perspective and tireless grappling with the history of painting, art, and culture: Her mostly large-format paintings, forms of expressive gesture and sketch-like figuration evoke art-historical perception, pictorial compositions, and schemes, afterimages of paintings seen. They broach the force fields, signs and emblems, glances and communications, norms and freedoms that make painting what it is.

Confirmation, a three-part work mounted on high, glass walls in a large, temporary exhibition space, is the beginning and quasi-prelude—a painterly and sculptural assemblage from the 2013 Seven Sacraments. Its acrylic surfaces incorporate various found objects and colored bits of painting, including the artist’s identity cards, along with picture frame angles, which become a shadow- and leitmotif in subsequent paintings.

Occupying the museum’s street level is the artist’s Tour de Madame cycle from 2018. Designed by Koether, the convex side of the glass walls displays a sequence of twelve Tour de Madame paintings, while the concave side features a second series with the three other paintings and nine works from the Museum Abteiberg collection, including those by Roy Lichtenstein, Allan Kaprow, Daniel Spoerri, Andy Warhol, Martin Kippenberger, Jacques de la Villeglé and Dieter Roth, along with two “shooting pictures” by Niki de Saint Phalle. The installation on glass walls creates transparent spaces and corridors that guide the viewer on a tour of themes Koether has explored in her paintings; her motifs range from the analytical pictorial theory of classicist painter Nicolas Poussin to pixel formations in today’s media. Koether’s consistently sketch-like way of painting through a red filter encounters works from the museum collection; Koether’s mode of seeing emanates throughout the entire installation and affects the museum itself. The glass wall, as laid out in Confirmation, serves to expand; reverse sides, stretcher frames, and material components of all these exhibits are made visible. This is likewise true of the corner angle, the shadow of which can be seen in the Tour de Madame paintings.

In another skylight room Koether shows her most recent large-format paintings, works she created over the past months in reference to the large “open paintings” (Koether) in adjacent rooms showing the museum collection: the space featuring Gerhard Richter’s 8 Grey Paintings (1975) and the one that houses Sigmar Polke’s Biennale cycle (1986), the grey paint and plastic sealer surfaces of which give full reign to the imagination, suggesting figurativity and representation. Koether’s own paintings are now stage-like spaces, hardly limited by the edges of stretcher frames and, as in early paintings from the 1980s and 90s, seem to zoom in on the viewer: Elements in them float and oscillate, joining golden, shimmering surfaces and portraits of people. Story, movement and action—important characteristics of Koether’s painterly biography which have also triggered new concepts in painting (cf. David Joselit, “Painting Beside Itself,” 2009)—are transferred to the picture plane. There are new identifications as well. The Neue Frau (New Woman) can be identified as New York politician Alexandria Ocasio-Cortez, the female stage character with the large fold in a red robe is a possible self-portrait of Koether, with brushes in her outstretched hands.

A number of works in the collection rooms have been re-hung and grouped differently in response to the Jutta Koether’s works.

Detours
As an addition to the all-day guided tours on the FIRST SUNDAY (of every month), Jutta Koether’s exhibition offers a special program of guided tours with invited art historians and artists. The dates and names of invited tour-givers will be announced soon.

The project Libertine will be included in a new artist’s book by Jutta Koether, which will be published subsequent to the exhibition.

We are very grateful to the sponsors of the exhibition and publication, the Ministry of Culture and Science of North Rhine-Westphalia, the Sparda-Bank West Foundation for Art, Culture and Social Affairs, the Hans Fries Foundation and Jürgen Hall.