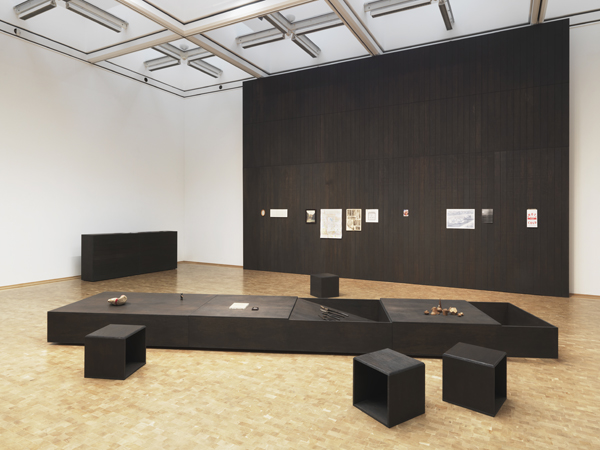 KONVERSATIONSSTÜCKE (Conversation Pieces) is the first lonelyfingers presentation in a physical space. Lonelyfingers is an online platform created in 2012 by visual artists Diango Hernández and Anne Pöhlmann. Lonelyfingers practice focuses on the objects and documents that accompany and inspire artists while developing an artwork.

Certainly we can live without objects but it is not clear if we would be able to remember without having them around. We use Finds* as points of reference, they guide us through complicated trips and while creating they keep us away from the emptiness that a blank piece of paper carries. Finds exist to remember and we create artworks to be remembered. In Luis Barragán’s Mexico City residency there is a piece of furniture that looks like an umbrella. It has a single standing foot and ends with four tilted flat surfaces that resemble a pyramid. On this fascinating object Barragán displayed books, prints and drawings that he was currently working with. Often friends visited him and he would share and discuss with them what was temporarily displayed on his ‘umbrella’. Sometimes he asked his friends to take as a present one of his Finds.

If I would have been one of Barragán’s guests and he would have asked me to choose between one of his Finds and one of his actual artworks, without hesitation I would have taken the Find. Would you take just a glass of water or the whole spring?

Lonelyfingers presentation at the Museum Abteiberg functions as the Barragán ‘umbrella’. Inside the exhibition KONVERSATIONSSTÜCKE you can see objects that belong to the creative process of artists. Those ‘magic’ references are as relevant as the ideas they have triggered and as consistent as the artworks they helped to create.


*Finds: Found objects, documents or any kind of found material used directly or indirectly in the process of creating an artwork.