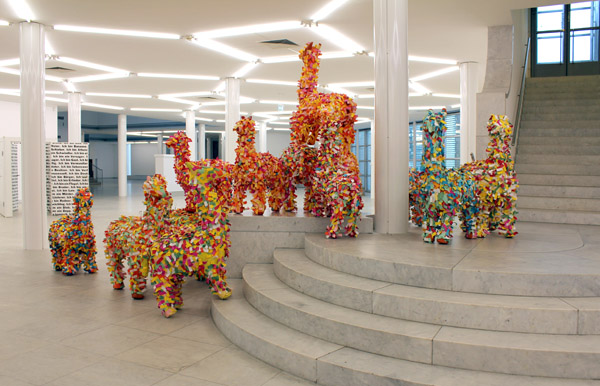 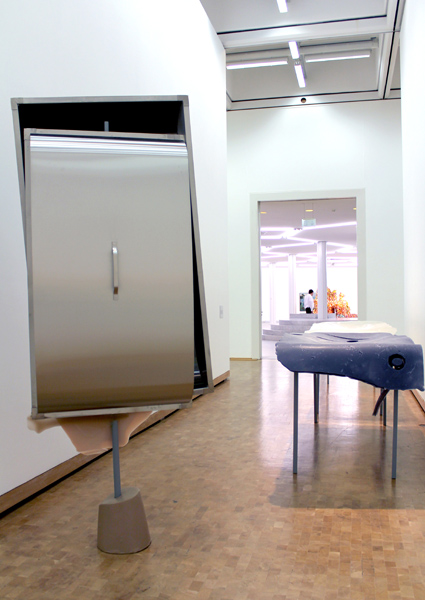 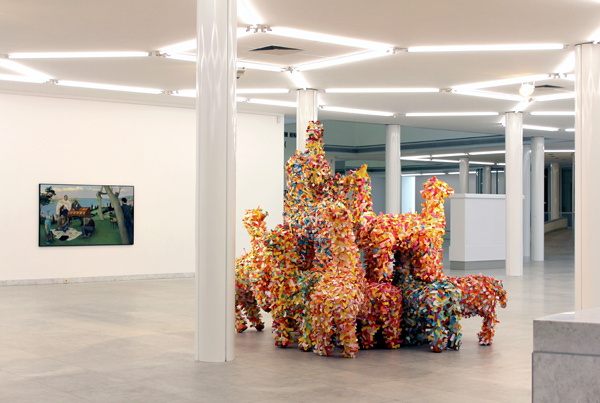 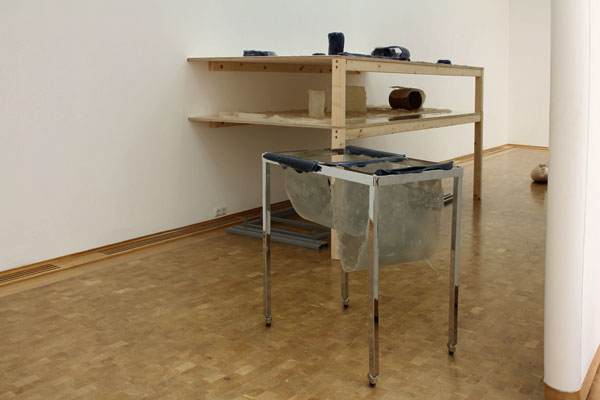 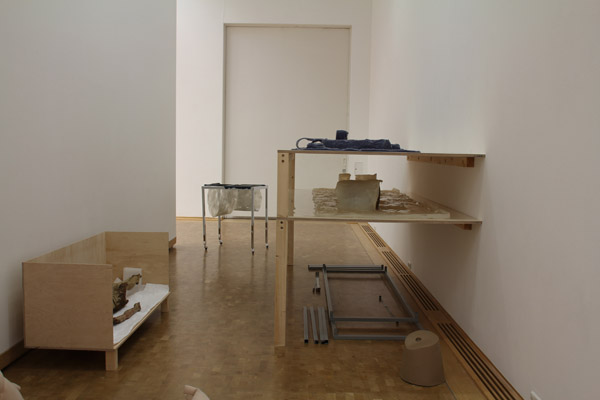 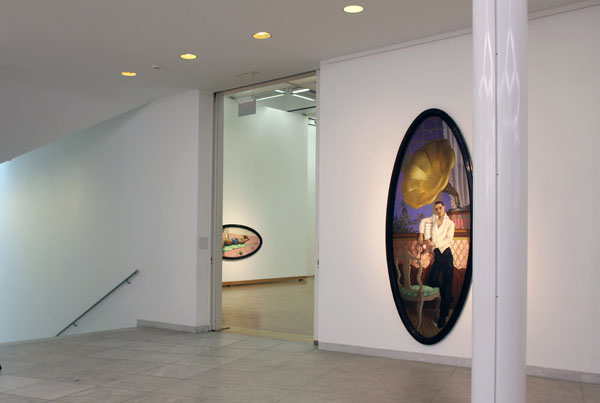 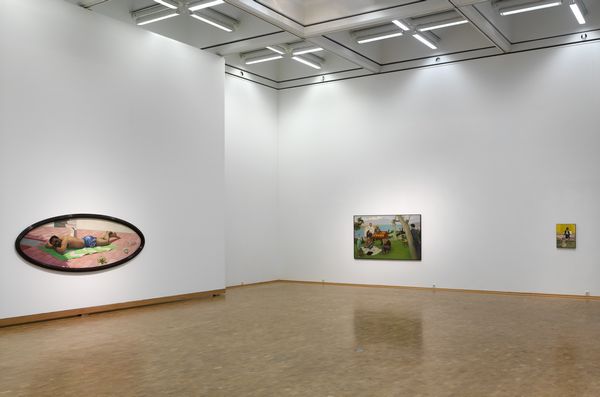 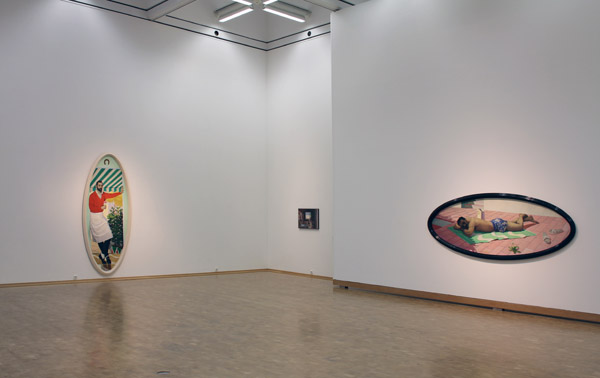 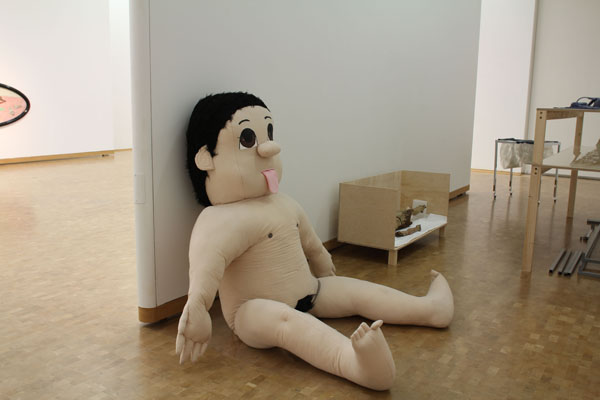 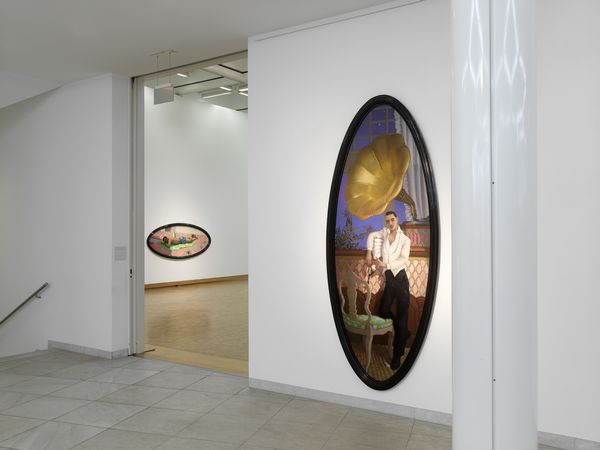 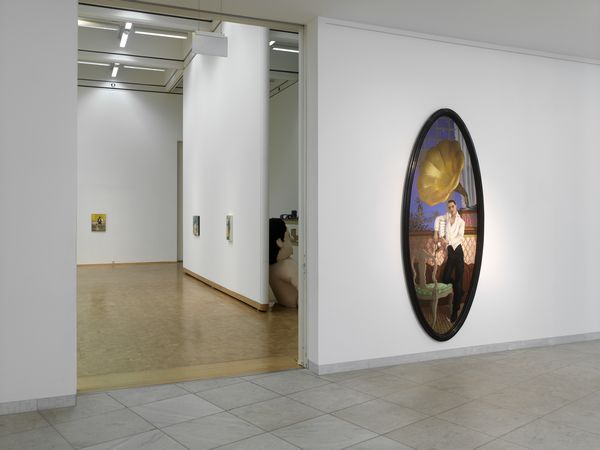 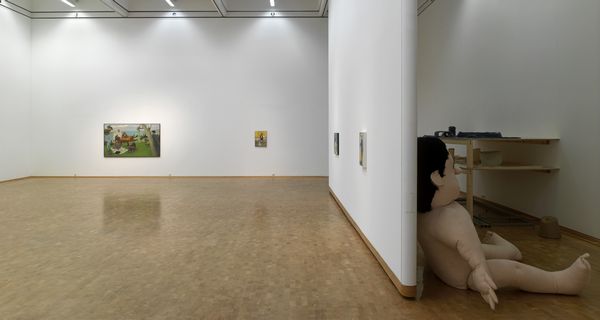 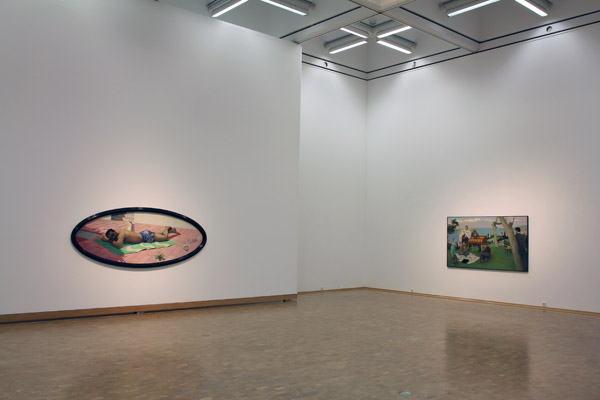 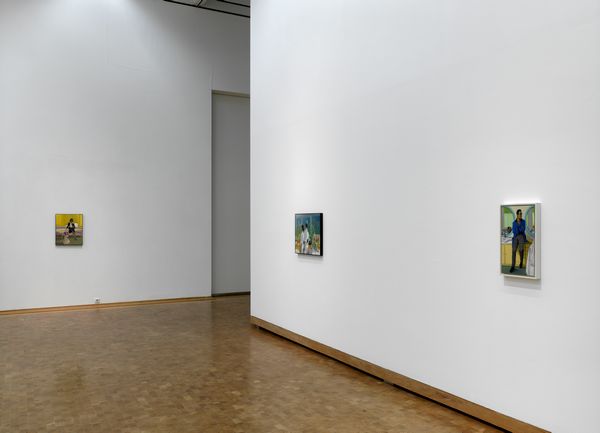 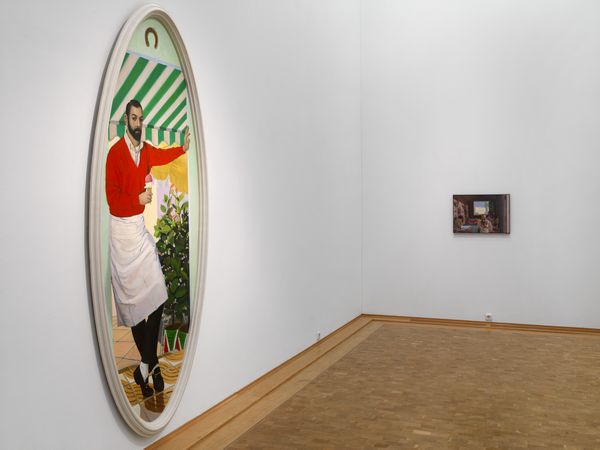 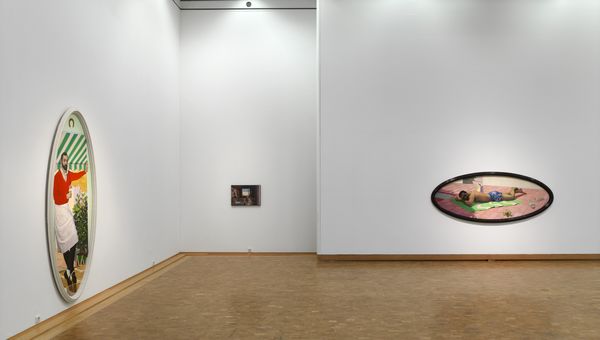 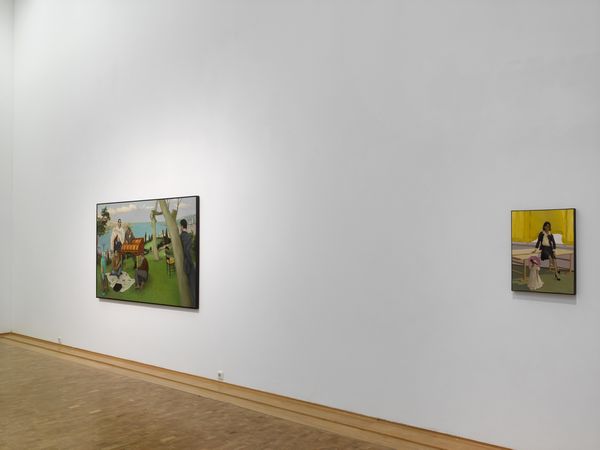 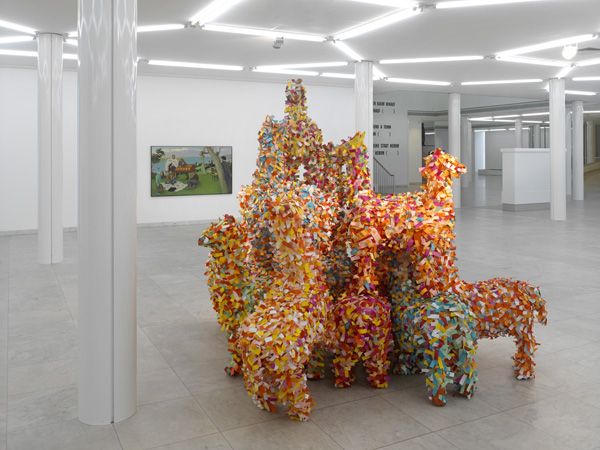 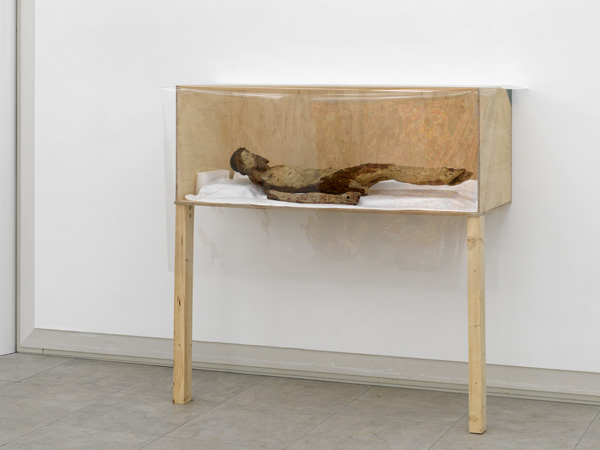 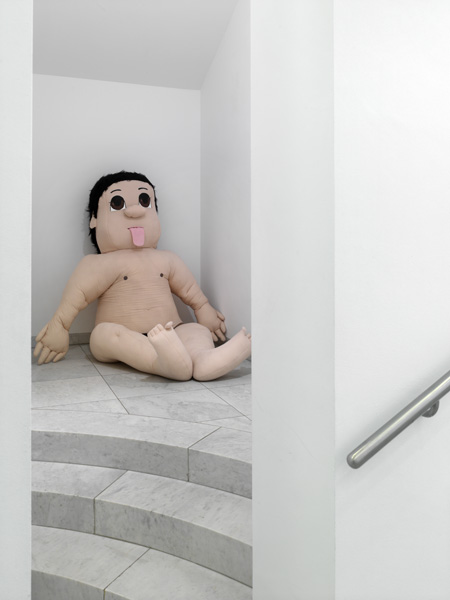 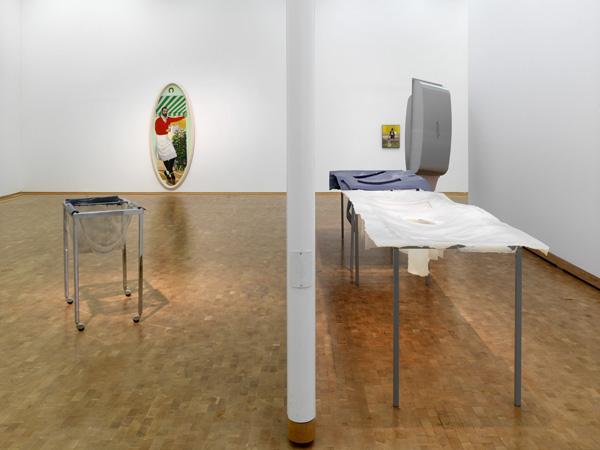 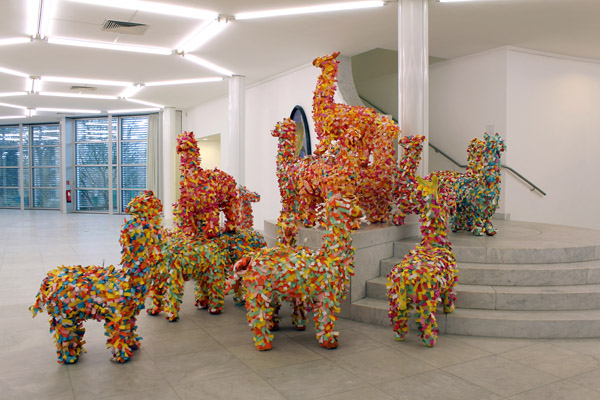 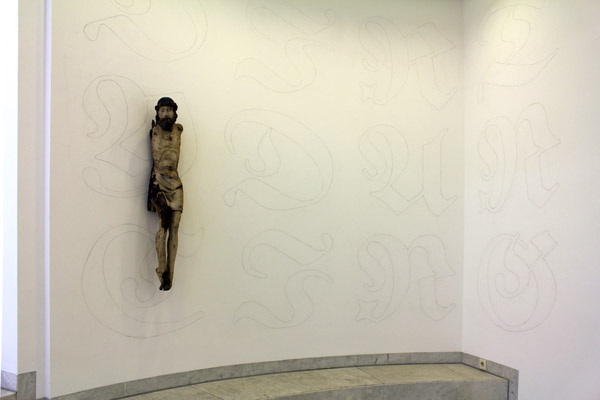 OPEN DRESS:  The exhibition is based on a concept that began in 2008 for a Kunstverein and now continues within the “museum” space: The connection and the contrariness of differing artistic practices is to stand beside one another for debate. This action by Baghramian is in comment and response to an ever increasing global art world in which large group exhibitions are evidence of a process of putting works together without the visible substantive participation of the artist.
The concept of the exhibition attempts or develops a connection back to the artist of this necessary involvement. Here the peer group is not the motivation for this invitation, rather positions are confronted that have different significances in the institutional field leading to questions about the necessity, duration, and quantity of public representation. The exhibition begins with a single presentation of borrowed works by the artist Lukas Duwenhögger, who for many years remained distant to the growing and sprawling exhibition industry and concepts. He holds his position as a representative of a critical curatorial practice and therefore has also been conceptually a constant companion for Baghramian. Accumulating over time and several months, Baghramian herself, Danh Vo and Lutz Bacher, will intervene into the original setting and arrangement.

from 1 February 2015
TUTTI
with new works by Lutz Bacher and Danh Vo, realized by Danh Vo and Phung Vo
After STELLPROBE and ICHI-GO ICHI-E

NAIRY BAGHRAMIAN is currently the Capp Street Resident at the CCA Wattis Institute for Contemporary Arts, San Francisco. Since the mid-2000s, she has had numerous exhibitions mostly with spatial installation concepts and several collaborations with artists such as Phyllida Barlow at the Serpentine Gallery, London, for example, or the Neuer Aachener Kunstverein. Recent solo exhibitions were held at ICA Boston, MIT List Visual Arts Center, Cambridge, Sculpture Center New York, Museo Rufino Tamayo, Mexico City, Muzeum Sztuki Lodz, and Kunsthalle Mannheim, where she received the Hector Kunstpreis in 2012. She took part in the Sculpture Project Munster in 2007, Berlin Biennale in 2008, Glasgow International Festival of Visual Art in 2011, and the exhibition “Illuminations” in the 54th Venice Biennale, 2011.

The project is generously supported by the Ministry of Family, Youth, Culture and Sports of the State NRW, the Foundation for Art, Culture and Social Affairs of the Sparda Bank West and the Rheingold Collection.