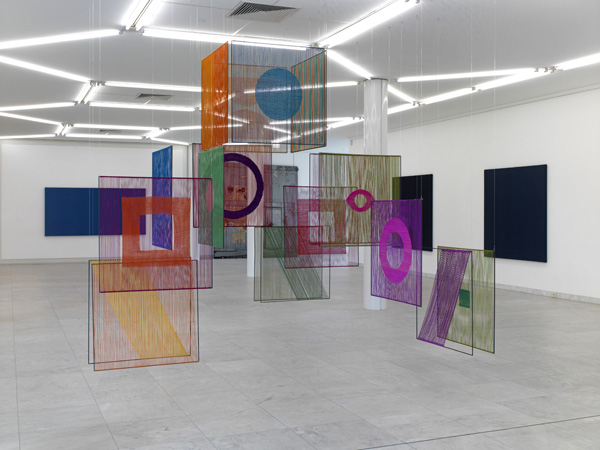 As one of the oldest techniques in human culture, textiles store knowledge and labour while communicating via colour, texture and form. The woven structure for example is based on an ancient system of warp and weft, intersecting threads that lead through serial repetition to the possibility of complex and beautiful cloth. Artists in the 20th Century have used textiles extensively as material, structure, referent and metaphor, although this connection has gone largely unnoticed by mainstream art history. And while there are many words for weaving, and the connection between textile and text is one explored by disciplines such as philosophy and sociology, the textile medium has barely impacted on art historical discourse where it remains little more than a footnote.

Based on the principle of woven structure and the thread as an organic line (as described by Paul Klee) TEXTILES: OPEN LETTER creates a dialogue between historical works and those of a younger generation. Through large-scale sculptures, wall hangings and fabric samples as well as works on paper, film and photography, the exhibition uncovers the potential of textile materials and structures, and looks at how artists have reworked this medium through iterations that are imaginative, conceptual and poetic as well as attentive to social concerns.

Especially since the Bauhaus, textile practice has been in dialogue with aesthetic and material experiments coming from the ‘fine art.’ During the 1970s, a number of women artists – including Lenore Tawney, Magdalena Abakanowicz and Sheila Hicks – pioneered the Fibre Art movement with the aim of establishing an independent status for textiles as part of a feminist praxis: often in close contact with Minimalist artists such as Agnes Martin, and in some cases on the basis of a training in the Bauhaus tradition. They designed monumental structures that moved beyond the technical limitations of the loom. A generation of artists emerging in the 1970s and 80s including Beryl Korot, Nasreen Mohamedi, and Lygia Pape, explored textiles though a fascination with serial notion and metaphors of the social, and today artists are often drawn to this medium because of its status as a ‘difficult’ material and its unstable position between functionality and aesthetics, art and craft, the individual and the collective.

The exhibition also shows the many and varied ways in which the history of Minimal and Conceptual art movements that shaped the Museum Abteiberg collection, have been influenced by textile materials and processes and by implication the extent to which textiles have been excluded from a discussion of the canon; often because of their utilitarian, gendered and déclassé connotations. In this sense, the title Open Letter (which refers to a 1958 work by Bauhaus artist Anni Albers) can be understood as an invitation to rethink the influence of textiles on art and vice versa, as well as the key role played by textiles in the development of an abstract visual language that can communicate across disciplinary boundaries.

In cooperation with Allianz Kulturstiftung and funded by Kunststiftung NRW and Mondriaan Fonds.